Massachusetts General Hospital researchers have linked electron imbalance in liver cells to many metabolic problems that increase the risk for medical conditions like cardiovascular disease and fatty liver disease.

Our metabolisms are always in flux, and one relevant metabolic disruption is reductive stress, when cells build up an overabundance of electrons. Reductive stress has been linked to certain rare genetic disorders of the cell’s power house, the mitochondria, but its role in more common conditions like cardiovascular disease and liver disease is unclear. A recent study in Natureidentified a biological indicator of reductive stress and used a gene therapy solution in mice to improve metabolism and relieve reductive stress.

Cells depend on a series of metabolic reactions to generate energy and to synthesize essential cellular components from nutrients to support their biological functions. The function of two molecules NAD+ and NADH are fundamental to these metabolic processes. NAD+ accepts electrons to become NADH when electron levels are high, leading to a high NADH to NAD+ ratio, the root of reductive stress.

Sky-high electron levels can be influenced by genetics and caused by excess food and alcohol consumption. “The food we eat tends to be very rich in electrons,” said Vamsi Mootha, M.D., of the Massachusetts General Hospital (MGH) Department of Molecular Biology, and senior author of the Nature study in a press release. “But if there’s an imbalance between the supply and demand for those electrons—specifically, an excess supply—you can get reductive stress.”

Dr. Mootha and the lead author of the study, MGH hepatologist Russell Goodman, M.D., Ph.D., oversaw a team that administered a genetically engineered bacterial enzyme called LbNOX, which decreased the NADH/NAD+ ratio and, thus, reductive stress, to the livers of lab mice that had been given alcohol using a virus. “Alcohol generates a ton of electrons, and that causes a lot of reductive stress,” said Dr. Goodman in the press release.

Importantly, mice treated with LbNOX had less free electrons and lower NADH/NAD+ ratios, or lower reductive stress, which decreased the levels of blood fats called triglycerides and improved metabolic factors like insulin resistance. Also, the MGH team saw that levels of a metabolite called alpha-hydroxybutyrate—which is linked to insulin resistance, type 2 diabetes, and obesity—rose in the blood of mice when electrons accumulated in liver cells due to a high fat diet, which then dropped due to administration of LbNOX.

The effects of hepatic LbNOX expression on plasma alpha-hydroxybutyrate levels and glucose tolerance in chow-fed or high-fat diet mice.

Previous genetic analysis linked alpha-hydroxybutyrate levels in humans to a variant in a liver-specific gene called GCKR that occurs in about 50 percent of people. The genetic variant in GCKR seems to affect risk for many diseases and unhealthy traits, such as fatty liver disease and elevated triglyceride levels that increase cardiovascular disease risk. Along these lines, the researchers showed that the GCKR variant in mouse liver cells was associated with high levels of alpha-hydroxybutyrate, linking it to reductive stress. This suggests that using LbNOX can synergistically improve metabolism and relieve reductive stress linked to GCKR and excess food and alcohol consumption. 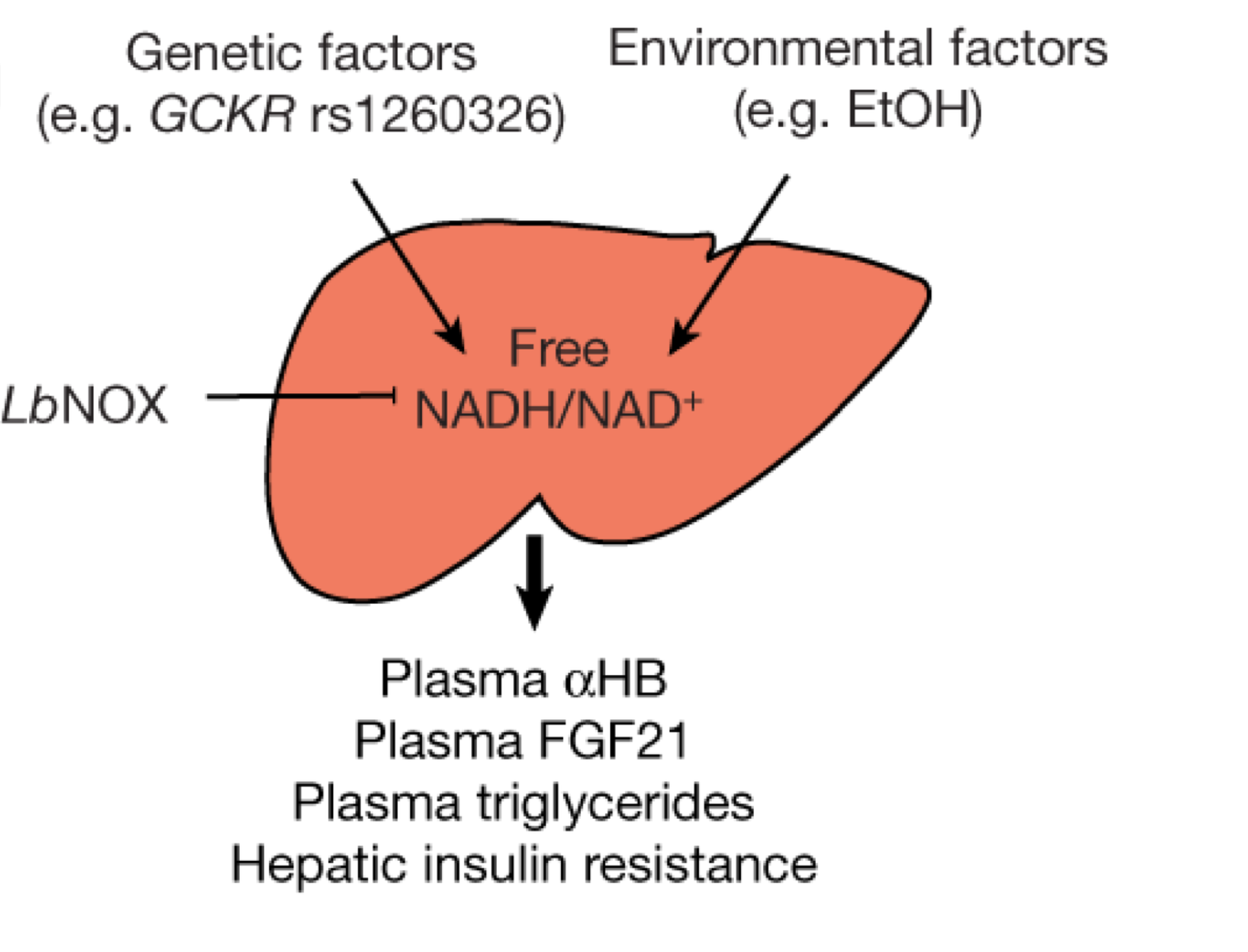 Proposed model, in which circulating αHB is a biological indicator (i.e., biomarker) of an elevated free NADH/NAD+ ratio in the liver, which is influenced by genetic and environmental factors and serves as an effector of different metabolic traits (Goodman et al., 2020 | Nature).

“The study showed that we can use [LbNOX] to control reductive stress in the liver,” said Dr. Goodman. Future efforts will be required to directly target reductive stress for therapeutic benefit in humans.