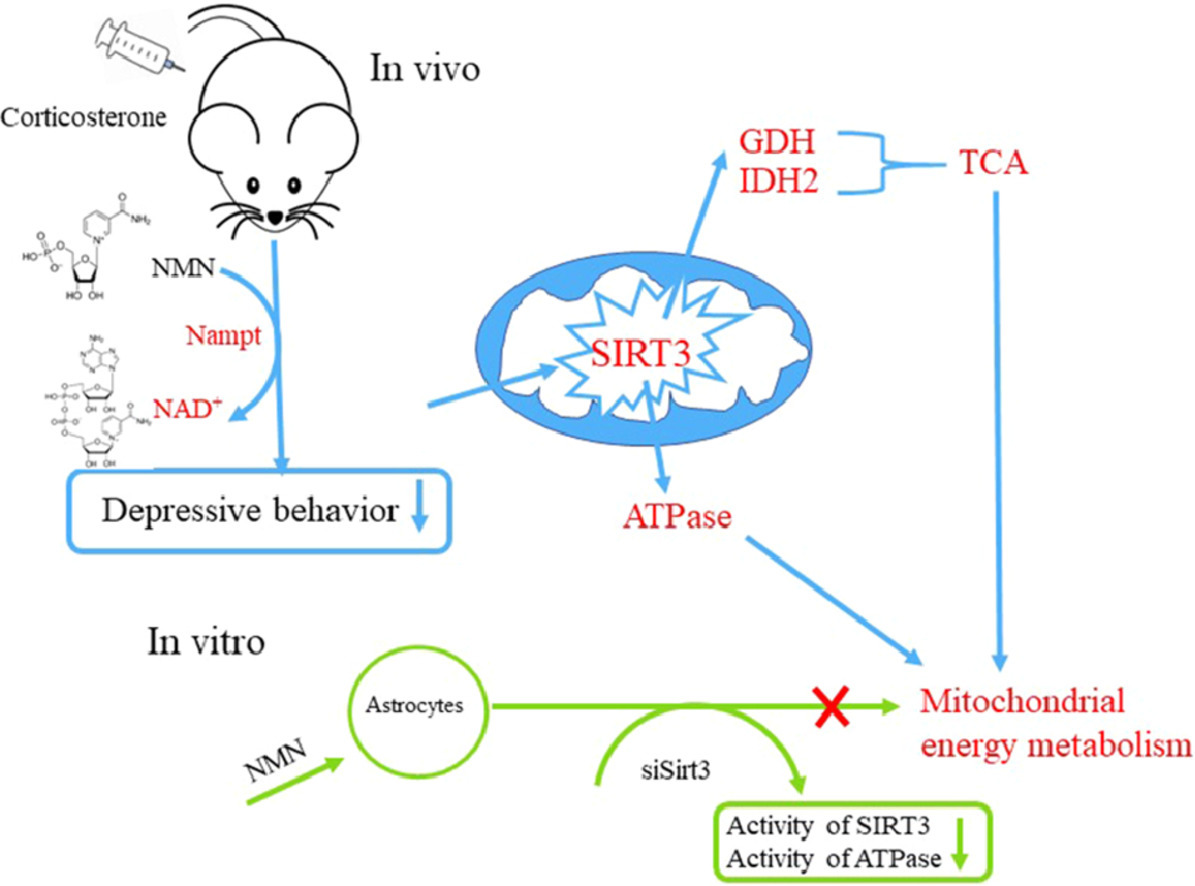 About 16.2 million US adults, 6.7% of the population, had at least one major depressive episode in the year 2016, according to the National Institute of Mental Health (NIMH). Symptoms of depression include an inability to feel pleasure, reduced energy, and cognitive deficits. Although doctors can prescribe antidepressant medications to treat depression, about two-thirds of people with depression don’t respond to initial treatments. About 15%-40% do not respond after multiple treatments, either.

In February, a team of scientists published a study in the Journal of Affective Disorders where they described beneficial effects of nicotinamide mononucleotide (NMN) injections on alleviating symptoms of depression in mice. They found NMN supplementation increased levels of a molecule important for energy production in the body, nicotinamide adenine dinucleotide (NAD+). Increasing NAD+ levels with NMN also improved energy metabolism in the cell’s powerhouse, the mitochondria, in the brain and liver.

Past studies have found decreased production of the body’s energy molecule, adenosine triphosphate (ATP), in patients with major depressive disorder. This reduced ATP generation could stem from dysfunction of the cell’s powerhouse, the mitochondria, leading to correlations with depression. Promoting mitochondrial function may be an intervention for improving depression-like behaviors. As a crucial molecule to keep the energy manufacturing line running, boosting NAD+ with NMN or NR can promote mitochondrial function.

NMN injections enhanced mitochondrial energy production in the brain, which is associated with NMN’s reversal of depressive-like behaviors, according to the current study. Stress hormone-induced depression also reduced NAD+ levels in the brains of mice but NMN administration restored NAD+ levels.

The team of scientists also looked at the activity of proteins which regulate cellular energy production and depend on healthy levels of NAD+ for their function. They examined a protein called SIRT3 that plays an important role in regulating mitochondrial health. Recent studies have also associated the protein’s role in depression. Although levels of SIRT3 dissipated with induced depression in mice, NMN rescued SIRT3 activity toward normal levels. The improved SIRT3 activity with NMN treatment correlates with reduced depressive behavioral symptoms such as better performance in the “forced swim test.”

“Our findings indicate that NMN supplementation can effectively enhance SIRT3 activity to improve mitochondrial energy metabolism in the hippocampus and liver, thereby mitigating [corticosterone]-induced depression-like behavior in mice,” stated the researchers in their study.

The scientists noted that the small sample size may be a limitation of the study and call for future studies with larger sample size and long-term studies to further investigate the mechanism of NMN on depression-like behaviors.