Comparing Interventions for Obesity and Being Overweight-Metabolism-Nicotinamide Mononucleotide (NMN): The Official Source

Comparing Interventions for Obesity and Being Overweight

A study indicates NMN supplementation and exercise can reverse glucose intolerance, where sugars accumulate in the blood from food intake, but these two interventions have tissue-specific effects on the function of the mitochondria.

In 2016, more than 1.9 billion adults were overweight worldwide, and about 35 percent of them were obese, according to the World Health Organization (WHO). If the current growth rate of the overweight population continues, almost half of the global adult population will be overweight or obese by 2030, according to the McKinsey Global Institute. The growing prevalence of obesity facilitates increased risk of several diseases such as type 2 diabetes, cardiovascular disease and respiratory conditions. The prevalence of overeating and a sedentary lifestyle has increased the importance of developing interventions for obesity and being overweight to improve physiological health and the quality of life.

Interventions that change the function of the cell’s energy-generating powerhouse, the mitochondria, have been proposed to combat diseases from obesity, namely exercise and nicotinamide adenine dinucleotide (NAD+) boosters like nicotinamide mononucleotide (NMN). An important molecule for mitochondria function is NAD+, which plays crucial roles in fundamental biological processes such as energy metabolism, lifespan regulation, and DNA repair. NAD+ levels in tissues throughout the body fall with age and also decreases with obesity. Both exercise and NAD+ supplementation increase NAD+ levels and thereby improve metabolism in obese mice. A team of scientists compared the effects of these two interventions in obese female mice and published their study in Frontiers in Pharmacology, 2016.

NMN and exercise boosted NAD+ levels of mice in the study and improved glucose intolerance, where sugars from foods build up in the blood, in high fat diet-induced diabetes and in aged mice. The body’s ability to utilize glucose and clear it from the blood indicated restored metabolism. 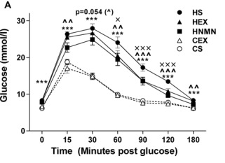 “In our study both exercise and NMN were shown to partly ameliorate the pathophysiology of [high fat diet]-induced obesity in female mice. However, the two interventions have tissue-specific differences in their alteration of mitochondrial biogenesis and function,” stated the scientists in their study.