Recent research on Alzheimers Disease from the Shanghai Geriatric Institute of Chinese Medicine and Shanghai University of Traditional Chinese Medicine identified Nicotinamide Mononucleotide (NMN) synthesis as a principal step in disease progression. NMN is the number one precursor used to make an important coenzyme in the body, Nicotinamide Adenine Dinucleotide (NAD). NAD+ is a predominant co-enzyme for hundreds of metabolic reactions 3.

David Sinclair, Harvard professor, notably conveyed “You could argue NAD+ is the most important molecule in the body, maybe with the exception of ATP. But without either of them, you’re dead in about 30 seconds.” 2

NAD+ decreases during metabolic stress and aging. Low levels of NAD+ are seen alongside Alzheimer’s disease and conditions linked to Alzheimer’s disease such as heart and vascular diseases and Type 2 diabetes. NAD+ benefits vascular health and metabolism, increasing vasodilation, blood flow to the brain, and cognitive function 4,5. NAD+’s metabolism is especially important as “ Studies have shown that energy dysmetabolism contributes significantly to the pathogenesis of a variety of aging-associated diseases and degenerative diseases of the nervous system, including Alzheimer’s Disease (AD)” 1. NAD+’s production is limited by the availability of NMN and the activity of nicotinamide phosphoribosyltransferase (NAMPT), the enzyme responsible for producing NMN.

NAMPT is responsible for producing the NAD+ precursor, NMN, and is the rate-limiting step for NAD production. The research team found that NAMPT inhibition causes Alzheimer’s disease metrics to intensify. Meanwhile, NAD+ injections decrease key indicators of Alzheimer’s disease, resulting in ‘positive feedback’ for NAMPT expression. This means that giving the mice NAD+ increases the ability to make more NAD+. The team found that NAD+ upregulates NAMPT expression in the cells which affected energy metabolism, plaque formation and cognitive decline in transgenic mice.

The team used transgenic mice, with human disease-genes. These mice, from Nanjing University, had Human DNA for Amyloid Precursor Protein (APP) and human presenilin protein (PS1). This allows the mice to secrete human Amyloid-Beta peptides. These proteins aggregate, forming plaques in Alzheimer’s disease that cause brain cells to die 6. Similar mice have been used around the world in other experiments of behavioral and physical changes that occur in Alzheimer’s disease.

The team theorized that re-establishing regular metabolism would limit brain-cell death caused by plaque formation, slowing the progress of Alzheimer’s disease.  To test this claim a variety of examinations were done on four groups of mice. Normal mice, Mice with human APP and PS1 genes (Alzheimer disease mice), disease mice in the test group were given a NAMPT inhibitor (FJ866) , and disease mice were given NAD+ intraperitoneally.

To test the role of NAMPT, the researchers injected the Alzheimer’s Diseased mice with NAD+ (30 mg/kg) or NAMPT inhibitors (1mg/kg) at 20 weeks of age and once every other day for 4 weeks. NMN inhibitor halted NMN and NAD+ production. NAD+ was used to simulate well functioning NAMPT. The researchers then ran a litany of tests to examine how the mice responded to either treatment. The team tested spatial reasoning skills, energy production, relative NAD+ concentration, and protein plaque formation.

The team tested the spatial memory of the mice with a morris water maze. They found that disease mice were significantly worse at the maze than the control group, indicating impaired mental abilities. Disease mice given NAD+ injections spent more time in the target quadrant, indicating that they could more easily remember how to complete the maze than their peers. 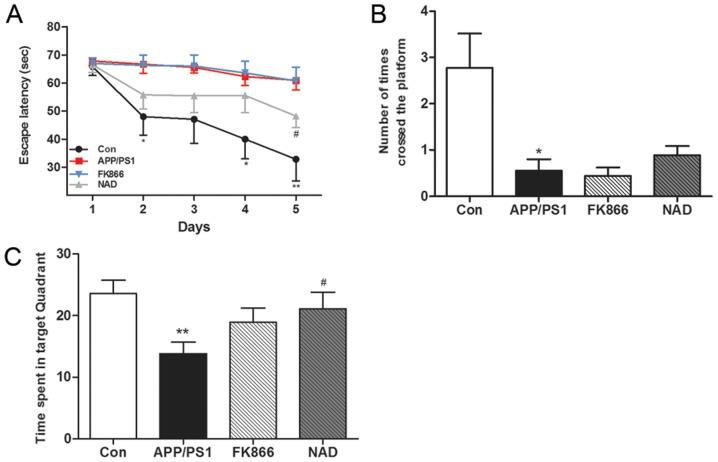 The team tested the mice for ‘senile plaques’ in the hippocampus and cortex, areas of the brain associated with memory, learning and reasoning. The researches stained slivers of brain tissue with Thioflavin S. They found that, as expected,  senile plaques formed in the Alzheimer’s disease mice. The control group had the least amount of protein ‘buildup’. The Alzheimer’s disease mice had the most amount of plaque build up, followed by mice given the NAMPT inhibitor. The Alzheimr’s disease mice with NAD+ treatment had less protein plaques than Alzheimer’s mice but more than normal control-group mice. 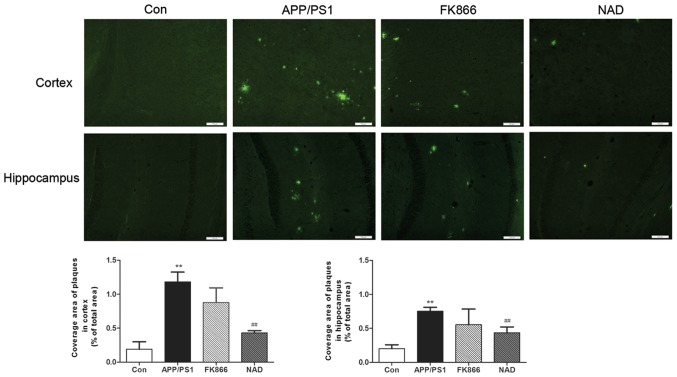 The team tested the brains for relative concentrations of NAD+.  They found that mice with Alzheimer’s disease have a smaller ratio of NAD+ to NADH in their brains. Disease mice were given NAD+ injections, however had increased amounts of NAD+ in the brain similar to the control mice.

The team compared the expression of NAMPT protein in the brains and found that the mice with Alzheimer’s disease had significantly less NAMPT production than the control group (P<0.05). Furthermore, the NAD+ injections significantly boosted NAMPT production compared to the disease group (P<0.05). This means that giving NAD+ as a supplement boosted production of the NAMPT enzyme, the limiting ingredient to NAD+ production. This would suggest that providing NAD+  creates a positive feedback look that results in increased NAD+ production. 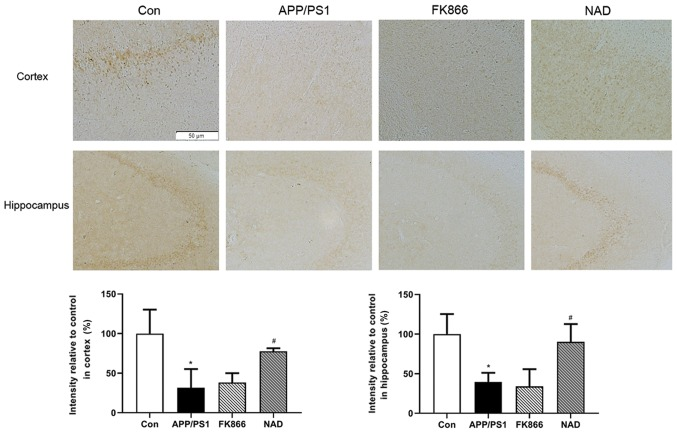 Lastly, the team performed a ‘western blot’ to analyze the exact quantity of disease-causing protein that was produced in the various group. The team extracted proteins from the brain and found that “ injecting NAD+ increased the expression of NAMPT in the cortex in the NAD+ mice (P<0.05).” The diseased mice had decreased SIRT1, and NAMPT production, which was somewhat relieved by giving NAD+ to the disease mice.

The team found that diseased mice with  NAD+ had increased cognitive function, increased energy production (ATP), younger NAD+ profiles (higher NAD+/NADH), and decreased plaque formation. This means that diseased mice given NAD+ supplements had fewer indications of Alzheimer’s disease.  The shanghai team showed that Alzheimer’s disease bio-metrics improved after treatment with NAD+. It would be interesting if a future study increased the sample size to verify the impact of NAMPT inhibition on Alzheimer’s disease mice. Furthermore, it would be useful to repeat this experiment using NMN instead of NAD+, given that NMN is the product of NAMPT synthesis rather than NAD+.