Increasing levels of eNAMPT enzymes in molecular bubbles in the blood delays aging and increases health span and lifespan in mice. 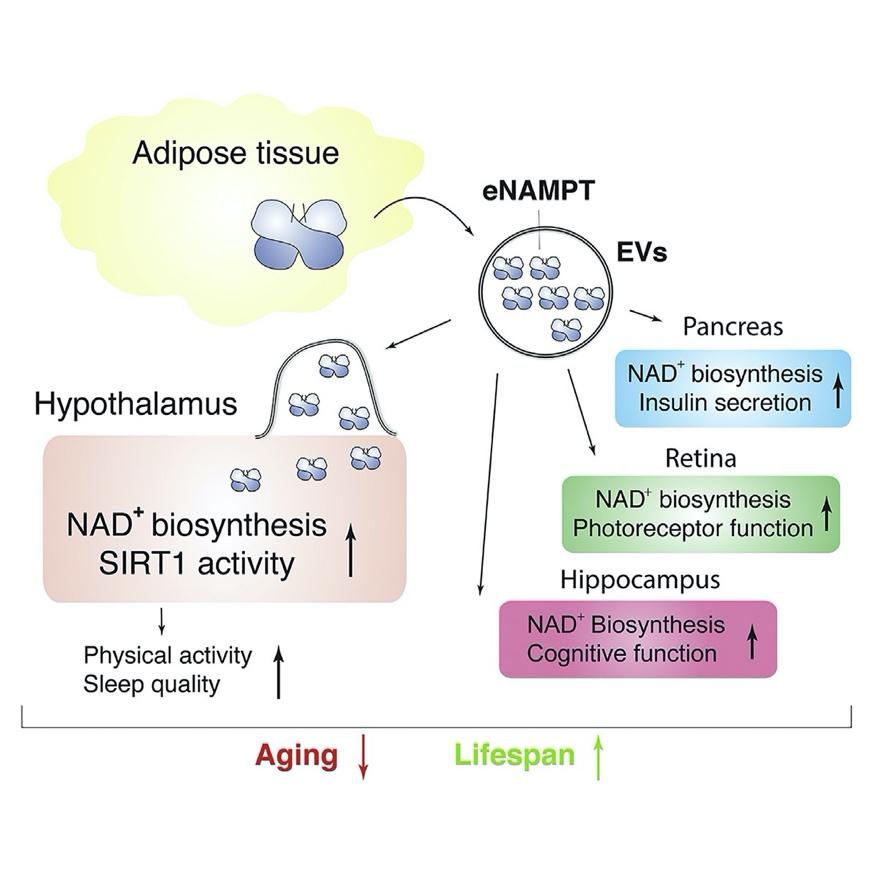 (Yoshida et al., 2019 | Cell Metabolism)Molecular sacks containing eNAMPT circulate in the body through blood from fat tissue called adipose tissue to organs like the pancreas, retina, hippocampus, and hypothalamus and rejuvenate them.

Gas runs low for a car after traveling a certain number of miles, and as organisms age, the fuel for our body does, too. One can compare this physiological gas to levels of a molecule called nicotinamide adenine dinucleotide (NAD+). It functions in biochemical reactions in the body to produce energy and maintain cellular health, powering cells throughout the body. Diminished NAD+ levels as people and animals age can facilitate age-related diseases like impaired cognition, heart disease, and metabolic disorders.

In 2019, scientists from Washington University School of Medicine in St. Louis published a studyin Cell Metabolism where they found an enzyme involved in NAD+ biosynthesis pathways delays aging and even extends lifespan in mice. The enzyme, called extracellular nicotinamide phosphoribosyltransferase or eNAMPT, produces nicotinamide mononucleotide (NMN) from B3vitamins which then converts to NAD+.

“We have found a totally new pathway toward healthy aging. That we can take eNAMPT from the blood of young mice and give it to older mice and see that the older mice show marked improvements in health– including increased physical activity and better sleep– is remarkable,” said senior author Shin-ichiro Imai of Washington University in a news release.

Like the hamsters you see in pet stores, lab mice tread along spokes of a metal wheel to get their energy out the same way. In mice with higher levels of eNAMPT, the animals ran longer and farther on wheels while having better sleep quality than mice with normal eNAMPT levels. Female,18-months-old mice with increased eNAMPT exhibited similar wheel-running activity to six-month-old younger mice.

The eNAMPT enzyme travels through the body, riding blood circulation in little bubbles called extracellular vesicles. These vesicles set sail from fat tissues, making their way to raise NAD+ levels in specific regions, such as the pancreas, retina, and portions of the brain including the hypothalamus and hippocampus.

The researchers also found an improvement in the vesicles’ destined organs and regions. Aged mice with enhanced eNAMPT expression levels showed better sleeping quality compared to normal aged mice. The animals sleep about as well as 4-month-old young mice, suggesting the enzymes were delivered to the hypothalamus, which governs the sleep cycle. Compared to normal old mice, the ones with elevated enzyme levels also showed an improvement in pancreas, retina and brain functions. These animals showed better insulin secretion, clearer eyesight and sharper cognitive functions.

In addition, female mice with enhanced eNAMPT expression had a delayed process of aging and lived 13.4 percent longer than the average lifespan of mice. Although male mice with more enzymes did not have a significant increase in median lifespan, the oldest 10 percent of these males had a significantly longer maximal lifespan compared to “normal” mice. Despite the lifespan extending difference in sex, the youthful levels of circulating eNAMPT in the bodies of these mice delayed aging and extended the health span of mice. 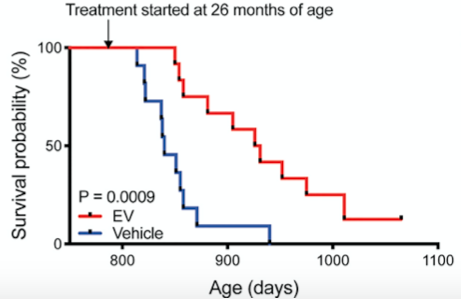 While younger mice have higher eNAMPT levels in the blood, the enzyme declines with age. The scientists extracted bubble-like extracellular vesicles containing eNAMPT from the blood of younger mice and gave them to the aged mice. The eNAMPT-containing extracellular vesicle injections boosted the NAD+ levels in cells and increased the lifespans of the animals. Injections of vesicles isolated from younger mice induced a lifespan increase of 10.2 percent in older, female mice. 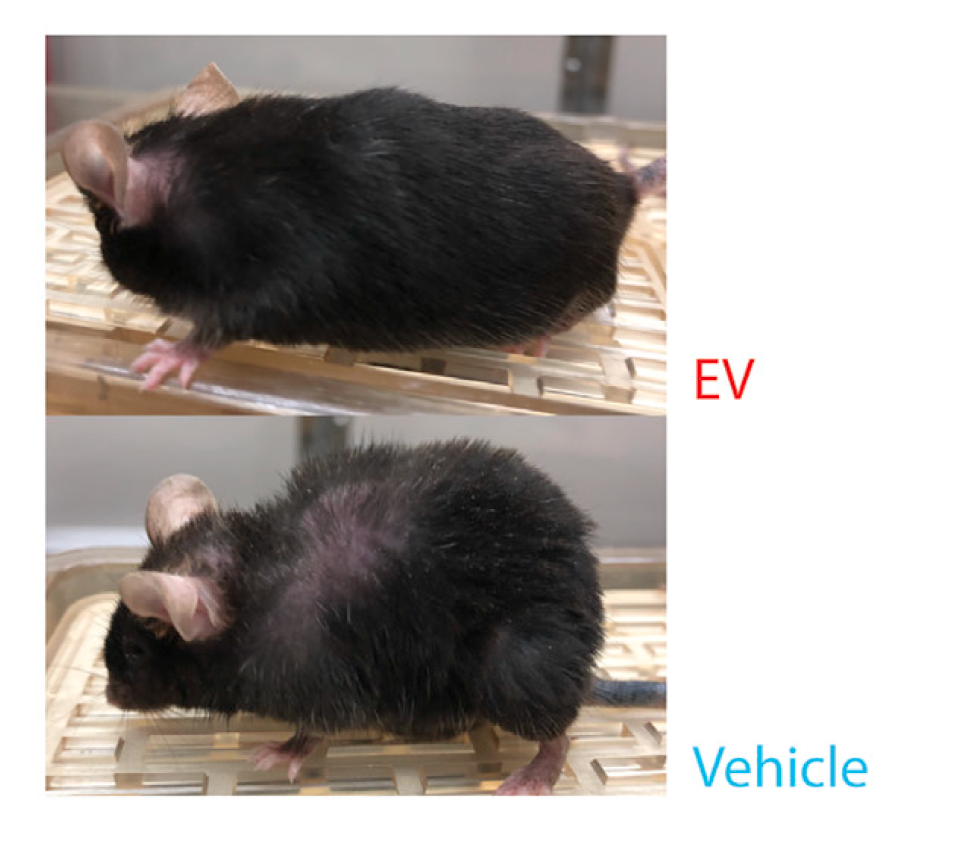