An oocyte is the very beginning of human life—in the simplest of terms, it is an immature egg cell that eventually matures and becomes an ovum, or egg. However, as women age, there is a decline in oocyte quality, and effective approaches to improve oocyte quality remain sparse.

A recent study in Cell Reports found that giving the nicotinamide adenine dinucleotide (NAD+) precursor nicotinamide mononucleotide (NMN) to mice effectively improves the quality of maternally aged oocytes. This study provides a potential strategy to improve the reproductive outcome of women of advanced maternal age. “Our work expounds a theoretical basis for application of NMN to improve the fertility of aged women and the efficiency of artificial reproductive technologies,” stated the researchers in their study. 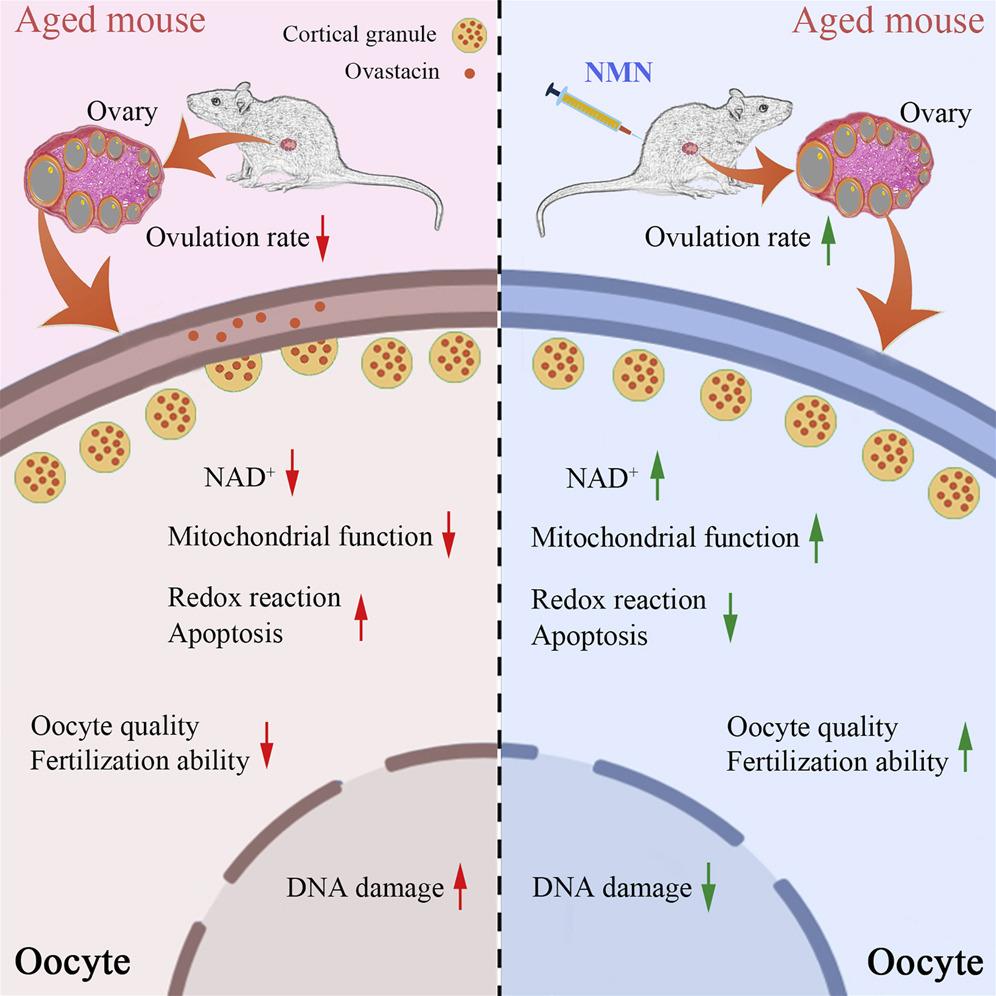 Supplementation of nicotinamide mononucleotide (NMN) efficiently improves the quality of oocytes from naturally aged mice by recovering nicotinamide adenine dinucleotide (NAD+) levels. NMN supplementation not only increases ovulation of aged oocytes, it also enhances their fertilization ability. These findings reveal that NMN supplementation is a feasible approach to protect oocytes from advanced maternal age-related deterioration, contributing to the improvement of the reproductive outcome of aged women and assisted reproductive technology.

High-quality oocytes, a prerequisite for successful fertilization and subsequent embryonic development, are the material basis for the onset of life. In most mammals, female reproductive aging is particularly defined by a prominent decline in the quantity and quality of oocytes and the fluid-filled sacs that contain them (i.e., ovarian follicles). Low-quality oocytes are a common and insurmountable problem for women with advanced maternal age and the main cause of the suboptimal reproductive outcomes. Despite the significance of the problem, strategies to sustain oocyte quality with age have been poorly explored.

NAD+ is a key element in metabolism and a critical regulator of diverse physiological processes, including genomic stability and cell survival. It has been reported that NAD+ levels decrease with age across many tissues and are implicated in a variety of diseases related to aging. Therefore, recovery of NAD+ levels is likely to be an effective anti-aging intervention.

NMN is a key precursor to NAD+ and administration of it can boost NAD+ content in cells. Accumulating evidence has shown that enhancing NAD+ biosynthesis by treatment with NMN in aged mice reverses age-related dysfunction in multiple organs. Although great progress has been made in the application of NMN toward aging, the effect of NMN on female reproductive aging has not been fully determined.

Previous research reports that the NAD+ levels decreased in oocytes from maternally aged mice but could be recovered by NMN administration to improve the quality of these oocytes. NMN supplementation to some extent increased the number of ovarian follicles, ovulated oocytes, and matured oocytes with less fragmentation.

Effect of NMN Supplementation on NAD+ Content and Quality of Maternally Aged Oocytes.
(C) Representative images of matured oocytes collected from mice. (D) The count of ovulated oocytes and the rate of fragmented oocytes in young, aged, and NMN-supplemented aged mice.

In their study, the investigators observed that maternal aging dramatically reduced the number of ovulated oocytes and the rate of matured oocytes but increased the incidence of fragmented oocytes–defective immature egg cells that break apart and fail, ultimately resulting in their death. However, when the investigators supplemented the aged oocytes with NMN to restore NAD+ levels, they observed an enhanced maturation rate and amelioration of defects in the number and fragmentation of aged oocytes. In addition, they observed that maternal aging severely impaired follicle development and that NMN supplementation increased the number of follicles.

Importantly, the investigators found that NMN supplementation improved the fertilization ability of aged oocytes. They also observed that NMN supplementation markedly promoted the subsequent embryonic development of fertilized oocytes. Along these lines, the investigators saw an improved formation rate of blastocysts–a collection of cells formed in the early development of mammals–from fertilized oocytes from aged mice . These results demonstrate that NMN improves the fertilization ability of aged oocytes and promotes their subsequent embryonic development.

Effect of NMN Supplementation on the Fertilization Ability and Embryonic Development of Aged Oocytes. (A) Representative images of early developing embryos in young, aged, and NMN-supplemented aged mice. Left, 2-cell stage embryos; right, blastocysts–a rapidly dividing ball of cells consisting of an inner group of cells that will become the embryo and an outer group of cells that nourish and protect the embryo. The rates of (B) fertilization and (F) the formation of a structure in early mammalian development called the blastocyst in young, aged, and NMN-supplemented aged mice.

Finally, the investigators found that the mechanism by which NMN was working to revitalize aged oocytes was by restoring the distribution and function of the cell’s powerhouse, the mitochondria. They observed that NMN supplementation suppressed the accumulation of reactive oxygen species–unstable molecules that may cause damage to DNA, RNA, and proteins, which can result in cell death. Along these lines, the investigators observed that NMN supplementation reduced DNA damage and, ultimately, cell death.